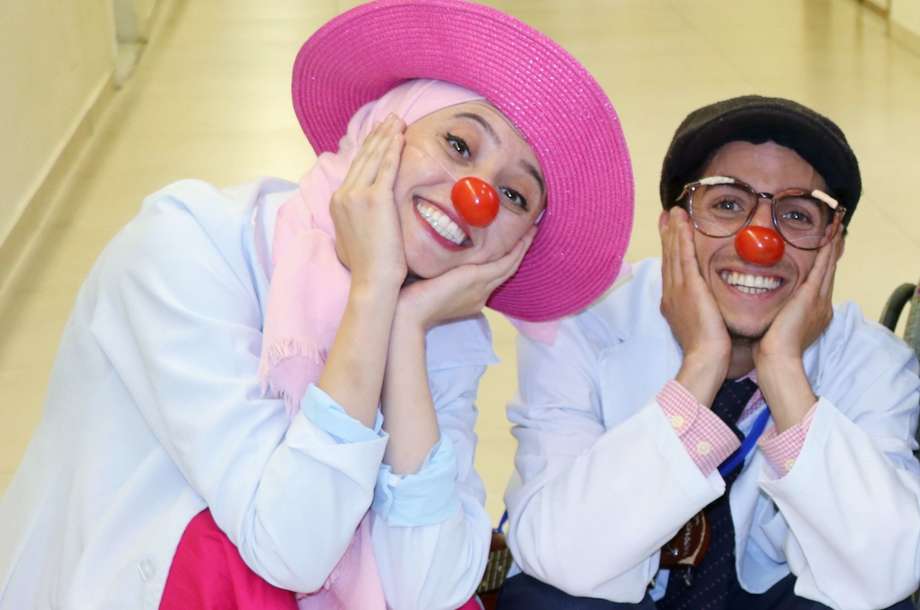 One day after the clowns’ visit to the children’s ward in Augusta Victoria hospital in East Jerusalem: Mousa, a four years old boy, was so impressed by the two clowns that he followed them to the changing room of the hospital. He stood there for 15 minutes watching the doctors, nurses, and all the normal (and boring) people come out, then he entered and saw the empty room. Mousa wondered: “Where did the clowns go?!”

In the meantime, Ezzat and Wala stood on the side after they took off their clown costumes to observe Mousa as he was still searching for them. When he came out of the room, he saw the two of them standing close to the door and asked them: “Where did Dr. Fostoq and Dr. SimSim go? I want to tell them that I really had fun today, and can’t wait to see them again”. Ezzat and Wala who visited the hospitalized children as clown duo Dr. Fostoq (Dr. Penuts in Arabic) and Dr. SimSim (Dr. Sesame in Arabic) were very touched by Mousa’s words. They realised that, for that kid, the clowns were as real as the doctors or any other adult in that hospital ward. Mousas’s inability to distinguish the artist from the clown was actually a victory. The artist, with the red nose, creates a person of its own.

For the healthcare clowns, the best part of the hospital visit is that, even after they changed their clown costumes, the children’s laughter lingers all over the paediatric ward.